Dish up – or see you in court Dlamini-Zuma

Dlamini-Zuma asked to provide reasons for extending lockdown – or see you in court.

DearSA attorneys Hurter Spies this week sent a letter to Cooperative Governance and Traditional Affairs Minister Nkosazana Dlamini-Zuma asking her to provide reasons why she extended the lockdown earlier this month and to give an undertaking no further extensions will be given.

She has also been asked to support her reasons with documents and expert evidence.

The minister has been given until 30 October 2020 to reply, failing which DearSA says it will approach the High Court for relief.

DearSA has run several public participation campaigns showing an overwhelming majority are against any further lockdowns.

The letter to the minister says DearSA believes that the extension published on 14 October 2020 “is irrational, unlawful, unreasonable, and therefore reviewable.”

Says DearSA project leader Rob Hutchinson: “After seven months of lockdown we now have a better understanding of the risks of Covid, and the best evidence tells us that further lockdowns will not materially impact the spread of the virus, but will do far more damage to the livelihoods of South Africans who have suffered a loss of income or jobs. Given the massive response to our public campaigns around various aspects of the lockdown, we are obligated to act in the public interest.”

The letter to the minister spells out why her decision to extend the lockdown is irrational:

“As is evident from the above synopsis, South Africa is no longer faced with the uncertainties that it was confronted with when the initial state of disaster was enacted and declared. Consequently, the circumstances that prompted the declaration have disappeared and therefore the underlying motivation for the national state of disaster has as well,” says the letter.

In terms of Section 37 of the Constitution, a state of emergency may only be maintained for 90 days before its extension must be approved by Parliament. No such parliamentary approval has been obtained for the latest extension.

The letter asks the minister to provide written reasons for the lockdown extension, backed by supporting documents and expert evidence. It also requests that the minister immediately terminate the national state of disaster and provide an undertaking that there will be no further extensions of the disaster.

The minister has until 30 October 2020 to reply, failing which DearSA will be forced to approach the High Court for relief. 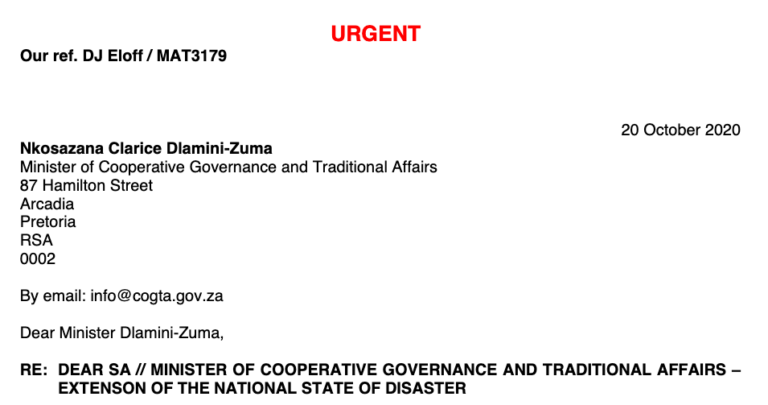